Employee or Contractor? What’s the difference?

Employee or Contractor? What’s the difference? 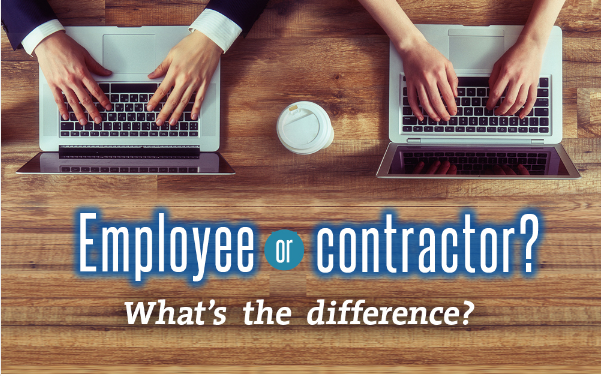 With the rise of the gig economy, correctly working out whether you are hiring an employee or simply engaging an independent contractor has never been more important. Getting it wrong can be costly, as a recent court ruling shows.

A Perth accommodation business was recently fined $60,000 after the High Court upheld an appeal by the Fair Work Ombudsman. It was alleged the company had contravened the sham arrangement provisions of workplace laws when it purported to convert three employees – two housekeepers and a receptionist – into contractors.i

This is not an isolated case. Employers need to ensure their working arrangements are correct as some industries are seeing a rise in claims by former contractors seeking compensation for not being paid their full entitlements as an ‘employee’.

Deciding if someone is an employee or a contractor is not always straightforward, but a key difference is an employee works in the business and is part of it, while independent contractors and subcontractors run their own businesses and are only supplying a service. They can choose their own hours of work and must pay for their own insurance, sick leave, holidays and super contributions.

It’s worth noting that engaging a company, trust or partnership is always considered a contract for tax and super purposes.

Before bringing any new worker or contractor on-board, the ATO recommends employers always check whether the working arrangement is legally deemed to be employment or a contract – even if the same person or a similar arrangement has been used previously. To help you decide, the ATO has an Employee or contractor decision tool on its website.

Checklist for employees and contractors

Whether someone is an employee or a contractor is determined by their specific working arrangements. There is no single test, but the ATO and Fair Work Commission look at factors including:

Note: Under the Superannuation Guarantee Act 1992, an independent contractor may still be considered an employee for superannuation purposes in some circumstances.

There are many misconceptions about hiring an independent contractor, according to the ATO.

Having an Australian Business Number (ABN) or a registered business name

A common myth is that having an Australian Business Number (ABN) or a registered business name automatically makes a person a contractor. In fact, having an ABN or being paid after submitting an invoice makes no difference to whether an employment arrangement is a contract or employment.

The length of a job

Another widespread myth is that the length of a job, or how regular the work is, determines whether someone is an employee or a contractor. Both employees and contractors can be used for casual, temporary, on-call or infrequent work.

The percentage of annual income paid

The percentage of annual income paid by an employer also has no influence on their employee’s employment status. Businesses sometimes think if they pay less than 80 percent of an employee’s annual income they’re not their employer. This so-called ’80 percent rule’ is only relevant for the ATO’s assessment of personal services income (PSI) and whether or not a contractor can claim business tax deductions.

Personal preference by the contractor is also irrelevant. Legally, it’s not a matter of choice, as employment status is determined by the working arrangement and specific terms and conditions of the job.

Signing a work contract stating an individual is a contractor does not override the true employment relationship and relevant legislation. It also doesn’t remove the business’s Pay-As-You-Go tax withholding and super obligations.

Sham contracts are usually offered by employers like the Perth accommodation business, which was trying to disguise an employment relationship as a contract to avoid paying the required employee entitlements.

Employers must ensure they’re not engaging in sham contracting when hiring an independent contractor, as both the ATO and Fair Work Ombudsman can impose significant penalties if they determine the worker is actually an employee.

Businesses also run the risk, if someone they hire as a contractor is later determined by the regulators to be an employee, that they will have to foot the bill for back-pay to cover the employee’s unpaid leave and employment entitlements.

Employers whose arrangements don’t comply face a growing risk as both the ATO and the Fair Work Ombudsman are devoting additional auditing resources to this area.

It’s also in the interests of employees and individual contractors to check their work status is correct. Otherwise they risk missing out on significant financial benefits and the employment protections they are entitled to.

Under current legislation it’s illegal for employers to misrepresent a current or proposed employment relationship as an independent contracting arrangement, or to dismiss or threaten to dismiss an employee so they can be re-hired as a contractor. It’s also illegal to make misleading statements to an employee to try to persuade them to take on a contract arrangement for similar work they performed as an employee.

Both employees and contractors can request assistance from the Fair Work Ombudsman if they believe their rights have been breached.

Call us if you would like to discuss your employment status, or to check whether you are meeting all your tax and superannuation obligations for someone who works for you.